Today is the last day of my Spring Break, and in true blogger fashion, I’ve been enjoying the morning cuddled up on the sofa with a cup of coffee and my iPad. I had planned to have today’s post be the first in a series about my room renovations, but truthfully, my room is still covered in a layer of dust from patching holes, and I’ve yet to tackle the mess. In it’s place is another post, this time introducing two of the craziest members of my household.

For as long as I can remember, my family always had animals. My parents took in a stray cat, Kitty, before I was born, and six months after I was born, they adopted a Chocolate Lab/German Shorthaired Pointer (GSP) mix, Tucker, who became my “brother” as I’m an only child. I had a lot of memories with those two growing up. At one point I held a wedding ceremony where I “married” Tucker wearing a toy ring and veil, and poor Kitty tolerated all of my antics every day including playing dress up. Tucker made it to 14 years old; Kitty, the cat who my parents were advised to put down before I was born, made it to 23!

Over the years, I had many other pets. Fish, hermit crabs, cats, and of course lots of dogs. One even made it on to the local news as my university’s mascot complete with her own basketball jersey! Tucker, didn’t know it, but he paved the way for a long line of GSPs in the family. My dad fell in love with the breed. He claimed it was the best because they were bred to hunt all day and were still great family pets. They also had cool traits like super short hair, big lungs for running, and webbed toes for swimming. Of course, they also came with a TON of energy.

{We currently have two dogs AND three cats, but in an effort to not support the idea that I”m some crazy cat lady, I’m going to start with the dogs this time.} 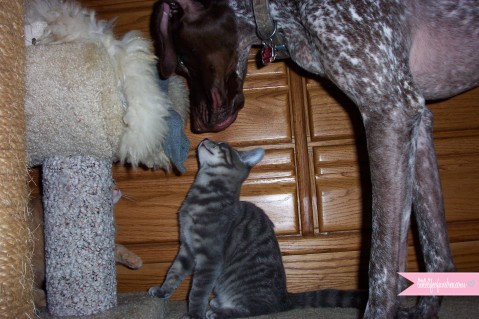 Dexter was the first of our GSPs. One lovely day as my dad was reading the local newspaper he ran across the local animal shelter’s Pet of the Week – a 2-year old purebred GSP. Later that day, my mom and I ventured to the shelter to see him. After 2 seconds of hearing his non-stop barking, we walked away and found another dog that was a little less quiet, Skeeter. We brought my dad back later to look at Skeeter, but he fell in love with Dexter as he passed. $16 dollars later, we had Dexter going home with us. Imagine our surprise when he didn’t make a sound at home for weeks. He was a fantastic dog, a little goofy, but fantastic, but at 7 years old, he went into organ failure, and we had no choice but to put him down. Shortly after he was gone, we decided we needed another dog in the house.

Meet Remington, the quirky, energetic one of the bunch. He came to us all the way from Ohio, and I’m sad to say that at 8 weeks old, this dog had spent more time on a plane than I have in 22 years. He was flown to us in a roundabout way from Chicago to Dallas to Baltimore in what seemed like the longest flight ever. I’m sure he was pretty terrified as well. Now he’s a bit larger at around 70lbs, but he still thinks he’s a puppy and loves to sit in laps. If he had his choice, he’d spend all day chasing tennis balls outside. He’s a bit obsessed.

About a year after we got Remington, we found a listing for another GSP on Craigslist in North Carolina. Her name was Zoey and she was a year older than Remington. At the time, Remington was becoming a bit too much for our elderly rescued Chesapeake Bay Retriever, so we figured a playmate more his own age would be better. She’s a little clumsy. Tripping up the stairs and walking into walks are specialities of hers, but she’s the most lovable dog ever. Just like Remington, she also doesn’t understand that she’s 80+lbs. She also needs to be in your lap at all times. 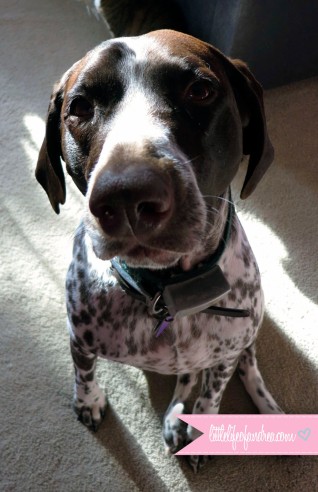 From the day we brought Zoey home, the two of them have become best buds and go everywhere together. They make my life crazy, and they wake me up barking at deer and whatever else wanders onto our property, but at the end of it all, I love them dearly.

When we first brought Zoey home.

Playing in the Snow

Next week, be ready to meet the other 3 critters in the house. I’m off to enjoy the last few hours of Spring Break before I have to return to work.