I’m pretty excited right now because my Fitbit Force got here a day earlier than I thought! I got a Fitbit Flex in June and was planning to do a review on it, but I just didn’t get around to it, so today’s post will be a bit of a review on the Flex and my first impressions of the Force.

So to start this off, I preordered my Flex and it arrived in June. After a LONG wait, I was beyond excited when it finally came in the mail. I set it up, and it’s been on my wrist ever since (aside from when it was charging). It took a bit to figure out all the taps, and I’m still not entirely sure I have them figured out. I usually just tapped until I got the alarm to go off, or got it to buzz for sleep mode. {Not a fantastic design there…} My main issue, one that everyone else seemed to have was with the wear and tear of the wrist band. After 2 months of wearing it, it was a wreck. It actually started to separate around the window that the tracker shined through, and I had contacted Fitbit who quickly sent me a replacement band. {I honestly wonder whether the bands were on backorder for so long because they had so many issues with them.} (Note: The pictures used in this comparison show the original band I received. I decided to continue using it until it fell apart. It’s nearly split completely at the base now.)

Anyway long story short, despite the band issues, I loved my Flex. No single device has motivated me to stay active more than this thing, and for that, it’s worth it’s weight in gold. When I heard about the Force, it was a no-brainer. I preordered it as soon as I could. I did have some hesitation after realizing I can’t wear it in the shower, and I can’t change the band, but I decided I’d hope for the best.

So about the Force. {and pardon the bad lighting in these pictures…}

Packaging (shown above) was VERY similar to the Flex. I again got the Black. 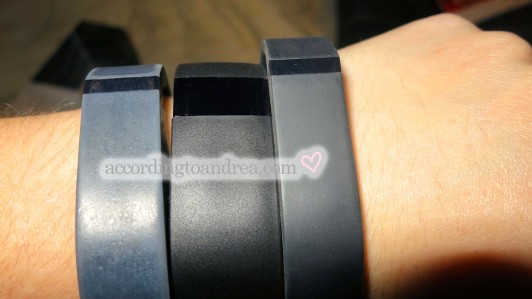 Upon taking it out the packaging, I was surprised to see that the band does look to be made of a slightly different material than the Flex. {This may be a good thing… *fingers crossed*} Also gone is the recessed Fitbit logo that tended to collect dirt. In it’s place is a slightly raised logo that’s barely visible. {I like.}

Fitbit Flex on the left, Force on the right. 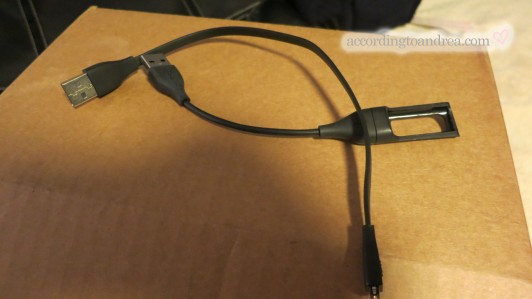 The Flex’s cable has a sort of pocket to hold the tracker, whereas the Force doesn’t.

The charger is sporting a slightly longer flat cable instead of the Flex’s round cable.

Set up was a breeze. I simply set up a new device to replace my Flex, and everything was done in under 2 minutes.

Right now my only gripe is that I can’t seem to find a way to get the screen display to stay on. The line you see next to the MI is the screen animation starting to wipe away the stats. It took me forever to get my camera to focus in time to get a picture. I’m not sure it’s possible or if I’ll even want it to, but for watch lovers, having to press a button to check the time may be a pain.  Update: After reading the Force 101 tutorial, the timer is for sleep. Why a timer, I have no clue. Not exactly intuitive on a watch-like device. Maybe Zzzz’s would have been more appropriate than a timer.

Now I’m off to package up my Flex which will be going to my very lucky mother who seems to be getting lots of gadgets lately thanks to me.

Do you have an activity tracker? I’ve always wanted to try the Up because it looks so much more stylish.

2 thoughts on “First Impressions of the Fitbit Force”